Dunster By Candlelight is an annual event held the first weekend in December in this beautiful medieval town with its iconic fifteenth century castle, market place and mill. This event is truly a wonderful spectacle for all the family with the ancient streets lit only by candles as is the wonderful Christmas tree - read on for more information 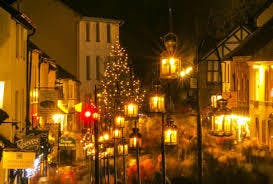 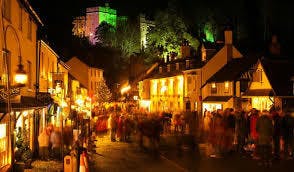 Dunster by candlelight was started in the mid 80's of the last century. It was started mainly because trade virtually stopped in the area when Dunster castle closed at the end of October. The traders needed something to keep the village alive during the winter months.

The Dunster traders' association was reformed and Hannah Bradshaw took on the mammoth task of starting Dunster by candlelight with a very small committee but great help from most of the traders and villagers. Some good points were made in those early days a) it would be on the first Friday and Saturday in December and b) that a charity would be included and that would be St. Margaret's Somerset Hospice.

Several years later it was suggested that all Dunster charities should also be invited to raise money at the event.

As the Candlelight got bigger, the main High Street and Church Street had to be closed to traffic during the evenings. It was originally thought too difficult to close West Street but now West Street is also closed making it much safer and fascinating with old cottages and various activities.

After many disastrous attempts at providing parking for candlelight visitors in the 90's it was decided to do a type of park and ride from Minehead. It proved very successful although in the last few years several Minehead Car Parks were lost to the supermarkets.

A few years ago the bus service was extended to Watchet, Porlock and Wheddon Cross, this also helped to reduce the flow of traffic into Minehead. 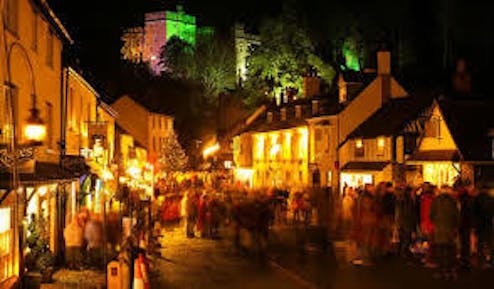 ;LAVENDER HILL HOLIDAYS HAVE ONE PROPERTY AVAILABLE THIS WEEKEND- THE RAILWAY CARRIAGE DO SEE OUR WEBSITE  www.lavenderhillholidays.co.uk A REALLY SPECIAL WEEKEND WITH A VISIT TO DUNSTER IN CANDLELIGHT CAN BE HAD HERE AND YOU CAN ARRIVE IN STYLE AT THE MAGNIFICNET TRAINS OF THE WEST SOMERSET STEAM RAILWAY ARE PROVIDING SPECIAL SERVIES FOR DUNSTER IN CANDLELIGHT!!! 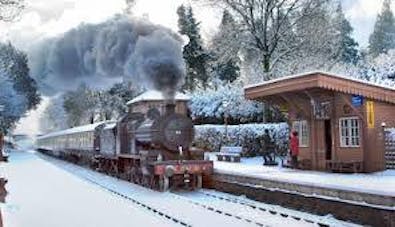